Rob Amchin has been writing books for Beatin' Path Publications since 1997. His titles include, Recorder Frolics, Alto Antics, Moods & Modes, Spring Songs, Autumn Songs and a currently underway project with the working title, Mixed Pickles. He's taught many times overseas including courses and workshops in Russia and Poland. This week he's in China with his wife Deb touring and presenting Orff workshops for the teachers there. 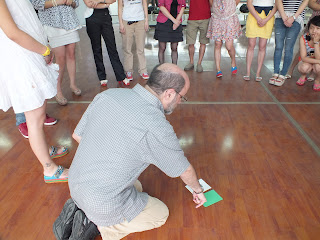 Rob was an invited presenter to the National Conference on Art Education for Rural Children in China. He gave three 6-hour presentations focusing on fundamental strategies in Schulwerk pedagogy. The conference took place in Xining, the capital of Qinhia Province in Central China from July 27-29, 2012. The Qinghai Normal Universtiy hosted the event. The 150 participants sang, folk danced, sang, improvised using movement, body percussion and instruments, made new discoveries using their own poetry and children's games, created new choreographies to music by Handel and Saint-Saëns, while learning the fundamental pedagogical goals of Orff teaching. 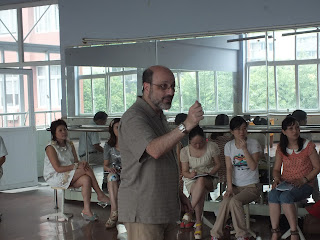 
This is Rob's second trip to China and he's hoping to return annually to plant the seeds for more Orff studies for the teachers there. There is a wide interest in Orff teaching and Rob's hoping to help it's development in China.
Brent Holl - beatinpath@mac.com
Posted by Brent Holl at 6:54 AM

Up to the Minute